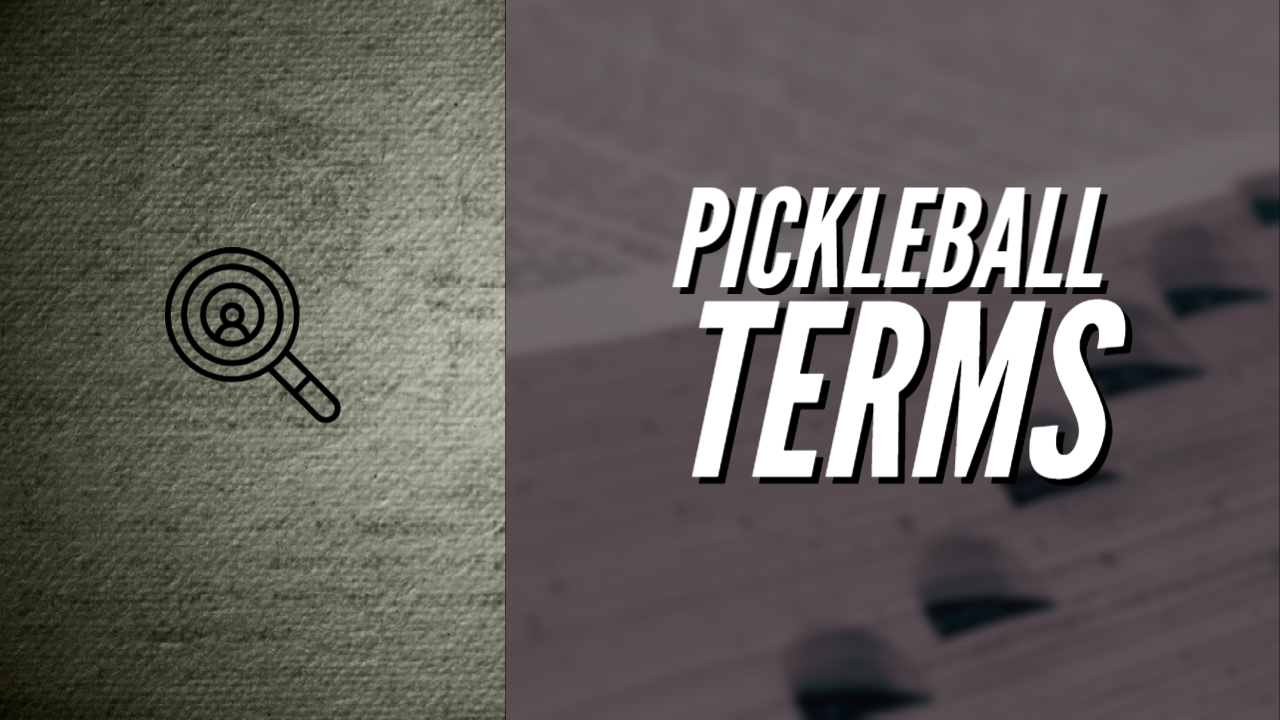 Pickleball terms and terminology don’t differ all that much from tennis and other sports. Well, except for the occasional ‘dink’ or ‘Erne!’ 🙂

The sport known as “ping pong on steroids” brings a vernacular as unique as the game itself. Here is a running list of pickleball terms to help keep you in the know.

Please let us know if we missed one of your favorite pickleball vocabulary words.

Looking for a good time off the court? Use our printable Pickleball Word Search puzzle. And grab the answers here if you get stumped.

Ace – A serve untouched by the receiver, granting a point to the service player.

ATP (Around-the-Post) – Often the result of a super-wide dink, this shot is hit around the net post; the ball may or may not travel over the net.

Backcourt – The part of the pickleball court that lives close to the baseline.

Backspin – A ball struck in a manner that gives it a backward spin. These balls tend to stay low to the ground but tend to float if not executed properly.

Backswing – The extension of the arm before hitting the pickleball.

Banger – A pickleball player who relies on forceful hits as opposed to dinks or soft shots. Think POWER over placement.

Baseline – The 22-foot line furthest from the net.

Block Volley – A volley that is carried out by moving the paddle in the path of the ball and deflecting it back into the opponent’s kitchen.

Carry – A legal paddle strike that occurs in a continuous motion but could see the ball ‘carry’ on the face of the paddle or even double hit.

Centerline – The 15-foot line down the middle of the court dividing the even and odd service courts.

Dead Ball – A ball that can no longer be returned; the point is over.

Dink – A shot often hit from your kitchen line that lands in your opponent’s non-volley zone.

Dink Volley – When you return a dink on a fly and softly volley it back into your opponent’s non-volley zone.

Double Hit – Hitting the ball twice during the same stroke; the offender does not get the point. See “Carry.”

Drop Shot –A soft shot, often with spin, that lands in your opponent’s kitchen. It is designed to change the pace of play or make your opponent advance towards the net.

Erne – A volley hit close to the net by a player positioned outside the left or right boundary of the non-volley zone. Named after Erne Perry, the shot’s ‘inventor.’

Even Court – When facing your opponent(s), this service area is on the right side of the court.

Fault – A serve being hit out of bounds or into the net; a fault results in a “dead ball.”

First Server – The person on the right during doubles serves first.

Foot Fault – There are two types of foot faults: when the server’s foot is touching the baseline when serving or when a player’s foot touches the non-volley zone during play.

Footwork – How your feet move and react to execute shots and balance.

Forehand – The opposite of the backhand; executed by swinging the paddle across the body with the hand moving palm-first.

Ground Stroke – A ball strike after a single bounce that typically occurs from or near the baseline.

Half Volley – A shot that is hit immediately after the ball bounces creating contact well before the ball peaks.

Lob – A shot hit over your opponent’s head designed to send them back towards the baseline.

Midcourt – The area of the court between the kitchen line and the baseline, aka “transition area” or “no man’s land.”

Non-Volley Zone – The 20′ x 7′ area near both sides of the net where the ball cannot be hit on a fly, and you may not purposefully enter– aka the “kitchen.”

Overgrip – Griptape placed over existing grip tape on a paddle’s handle to increase the size, provide an additional cushion, or absorb sweat.

Paddle Tap – Opponents tap the butts of their paddles at the net after a match.

Poach – When a player moves across the court, possibly in front of their partner, to hit a volley

Ready Position – Knees bent; feet shoulder-width apart; paddle in front of your body as you wait to hit the ball

Second Server – The person on the left during doubles serves second.

Sidelines – Two 44-foot lines that run down both sides of the court from baseline to baseline.

Side-out – When the serve opportunity shifts to the other person or team.

Singles – One vs. One

Skinny Singles – Pickleball practice or a game that uses only one-half of the court vertically.

Slice – A shot hit with undercut/backspin.

Stacking – A strategy used where doubles partners position themselves to keep one player on a particular side of the court as opposed to standard positioning.

Third Shot Drop – A shot that arcs upwards and lands softly into the opponent’s non-volley zone.

Topspin – The ball will continue to travel forward when it lands, unlike topspin which can redirect or slow down.

Two Bounce Rule – After the serve, each side must let the ball hit their side of the court first before the first volley is performed.

Volley – A ball hit out of the air before it bounces.

Have we missed one of your favorite pickleball terms or sayings? Please let u know if the comments section, and we will continually update this post.